Have you ever wondered about pearls?

The history or how to tell the different types of Pearls apart?

It’s helpful to get the names correct for starters. Broadly, there are three types of Pearls: Natural, Cultured and Imitation.

13th Century– first attempts to grow pearls as a cultured product were made in freshwater mussels in China and cultured blisters were reported with the shape of Buddha.

1896 Mikimoto finally received the first patent for culturing pearls. Soon after, huge quantities of Mikimoto cultured blisters were being marketed as “culture pearls”.

1899 he founded the first Mikimoto Pearl Shop in Tokyo, a small firm that eventually became the international group now known as Mikimoto Pearl Island, with its headquarters in Toba.

1905 Kokichi Mikimoto the pearl king succeeded in generating the first whole cultured pearl and decided to dedicate his life to fulfil a dream: to adorn the necks of all women in the world with pearls

1930 and eventually granted him the honourable title of official jeweller to the Imperial House of Japan.

1946 the story of Cygnet Bay Pearls started with entrepreneur and founder, Dean Brown. discovered the secluded, unspoilt beauty of Cygnet Bay along with the precious gift of the Pinctada Maxima pearl shell. This oyster is the largest oyster in the world and has a beautiful thick and lustrous shell,

1960 the first trial harvest of cultured pearls is in – Cygnet Bay Pearls Up until this moment it was only the Japanese that had the expertise to successfully culture pearls. No farm in the world had ever been started without Japanese involvement.

Early 2000’s some 17 independent pearl producers plied the Kimberley coast. But the economics of pearling was about to shift. The Global Financial Crisis devastated wholesale pearl prices and within a few years only three pearl producers were left in Western Australia: Cygnet Bay Pearls, Paspaley and Clipper Pearls.

Until the middle of the twentieth century there were only natural or imitation pearls, Natural Pearls were, and remain, extremely rare, and were occasionally found in freshwater mussels, and seawater oysters. Molluscs that produce their own shells from the edge of their mantle can also produce pearls, by coating irritants that enter the shell with many layers of nacre, as a protective mechanism. This is rarely the fabled “grain of sand” and more likely a piece of broken shell, or a parasite. Cultured Pearls are basically Farmed pearls, made by the same methods as natural pearls, by shells that are suspended from rafts, in oceans, seas, or rivers. Cultured pearls are implanted with a nucleus, which will irritate the mantle and start the formation of a pearl. The type of pearl that grows will depend on the species of the oyster or mussel, the cleanliness of the water, water temperature, and availability of food. The most prized pearls are South Sea Pearls, which grow in Northern and Western Australian waters, from the Pinctada maxima, which has a silver or gold colour, and Pinctada margaritifera, which has a black colour, and grows in the Pacific Ocean around Tahiti and the Cook Islands. South Sea Pearls have greater Lustre than the freshwater varieties, and grow to bigger sizes, the value of a pearl is based on its size, shape, colour orientation, and lustre.

Freshwater pearls from Asia have improved greatly in quality in recent years, come in many and varied colours- either natural or dyed, and are an affordable alternative to South Sea pearls.

Mabe: are blister hemispherical pearls that grow on the inside of the pearl shell. 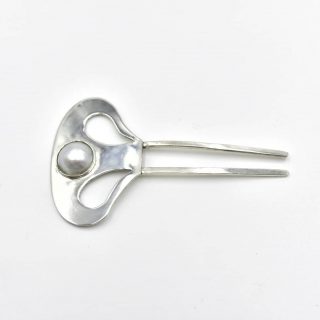 Baroque: are unevenly shaped round pearls, which have a slightly organic look.

Keshi: are pearls that grow incidentally in farmed pearl shells although they often occur by chance, are not considered natural. They are a byproduct of the culturing process, and hence do not happen without human intervention. They are quite small, typically only a few millimeters Tahitian cultured Pearls (or black pearl from the black lip oyster (Pinctada margaritifera). These pearls derive their name from the fact that they are primarily cultivated around the islands of French Polynesia, around Tahiti. Black pearls are very rarely black: they are usually shades of green, purple, aubergine, blue, grey, silver or peacock (a mix of several shades, like a peacock’s feather South Sea cultured Pearls are the most prestigious of all the pearl varieties, produced by the Pinctada maxima pearl oyster. South Sea pearls are the colour of their host Pinctada maxima oyster – and can be white, silver, pink, gold, cream, and any combination of these basic colours, including overtones of the various colours of the rainbow displayed in the pearl nacre of the oyster shell itself.

Freshwater cultured Pearls are pearls that are farmed and created using freshwater mussels. These pearls are produced in Japan and the United States on a limited scale, but are now almost exclusively produced in China

Circle: are round pearls marked with one or more rings around the diameter, which is an indication of the pearl turning around in the shell against a sand grain or other irritant, as the earth spins on its axis.